Dollar Stores are great for a lot of things, but there are quite a few that you shouldn’t buy at one.  For some, it’s a price issue, for others it’s a quality issue. Either way, buying any of these 7 items to never buy at the at the dollar store is a surefire way to lose money. 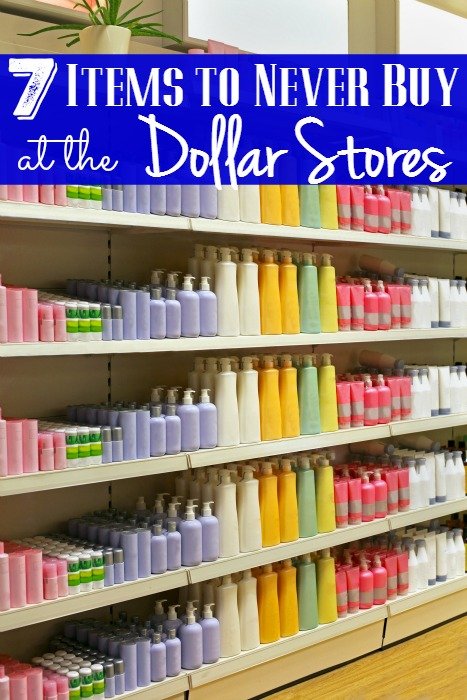 7 Items to Never Buy at the Dollar Stores

Aluminum Foil – Ever bring home a tube of foil only to find out that it’s so flimsy you have to use three times more because it keeps ripping? Welcome to a dollar store purchase.

Instead, pick up name brand foil. You’ll pay more but you’ll use less meaning you save in the long run. Watch Amazon you can score some great deals on aluminum foil.

Electronics – A lot of the time, electronics and appliances that the dollar stores are selling are units that are labeled as seconds or are badly refurbished units. Instead, head to a reputable big box store or a site like Amazon and buy your electronics from there.

Vitamins– As much as you may want to ignore it, a large portion of dollar store items are shipped from outside of the US and in some cases that can include vitamins and medicine.

Since the FDA doesn’t regulate vitamins, it’s best to skip them at the dollar store. You don’t know for sure what you’d be getting and when it comes to putting something in your body, it’s better to be safe than sorry.

Related: 7 Best Things to Buy At The Dollar Store

Oven Mitts & Kitchen Towels – If you’ve ever bought them at the dollar store, you know that they’re going to last you exactly one or two washes. You’ll spend more money by buying cheap than if you were to buy quality and pay more out of pocket.

Bath linens – Bath towels and wash cloths at the dollar store are smaller and thinner than their more expensive counterparts. Instead, watch Kohl’s or Macy’s for sales and coupon codes and you can pick up quality ones for around the same price.

Toys – While the dollar stores are full of affordable toys, most of them are very cheaply made and won’t last past one play. The last thing any Mom wants is a heartbroken kiddo whose new toy just broke.

Instead, check online sites like Amazon for great deals or troll the clearance aisle at Walmart. You’ll get better quality toys for just a few dollars more.

Tools and Hardware – Ever paid attention to a dollar store hammer? They’ve got a thinner neck which means it won’t take much to break that thinner hammer neck right in half. Instead, watch for deals on quality tools and get your money’s worth.

The dollar stores are full of deals that are great, but these seven items will only have you spending more in the long run. Steer clear of them and you’ll be sure to get a much better deal even though you might spend a bit more at first.