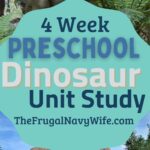 One thing I learned while homeschooling is to take what my kids are interested in and run with it! Early on they showed interest in Dinosaurs so I made a whole 4-week dinosaur unit study for them. I put everything together and below I share what we did so you can recreate it yourself!

Please note you may have seen this post before!! I this used to be 4 separate posts (1 each week) I just combined them to make it easier on you!

My kids recently caught the Blues Clues Dino episode and had been playing make-believe dinosaurs for the past few days. This inspired me to do a whole lesson plan for both my then PreK kid (then age 4 and my preschooler (age 3). I combined them together for this lesson.

We turned this into a 4-week course as we mixed in Math workbooks, and for my 4-year-old Teach Your Child to Read in 100 Easy Lessons, along with some PreK workbooks. We have a field trip planned for each Saturday of this unit as well.

Week One we eased into the study and the start of school this year. Make sure you follow our Preschool Pinterest Board.

We started the unit off the weekend before by having the kids watch some Dino Train from PBS Kids. This show is great because being on PBS it is very educational. They give the real name of the dinosaurs and they have a paleontologist that talks about different dino-related topics.

Monday started off by reading Go Diego Go – The Great Dinosaur Rescue. I chose this book because they love the Diego show and I figured a great way to kick it off was with a character they knew.

We also watched the movie Dinosaur Train Pteranodon Family Adventures from Netflix on and off threw out the week.

To prepare for the upcoming field trip we did a Dino Egg Hatch using Hatch'em (Growing Pet Dinosaur). Parents are warned this is more work for you then the kids. It takes some serious scrapping. I would scrap then let them ‘dust'  while I did the 2nd egg. All in all the kids loved it. My son got a stegosaurus and my daughter got a triceratops. You will need to clean the toys well before letting them play with them.

We also made our own Kool-Aid Play Dough. We had the kids make Dinosaurs from the playdough and let my 3 year old go to town as it's a big help for her fine motor skills.

We also mixed in the Dinosaur Handwriting Without Tears Set from Homeschool Share. My 4-year-old traced the words and colored than on the back drew his own version of that dinosaur. My 3-year-old just colored the pages and studied the types of dinosaurs.

For our field Trip that week I had found real-life dinosaur dig about an hour from the house where the kids could look for real dinosaur Fossils! The Dinosaur Park is open to the public 2 days a month (the first and 3rd Saturday of each month. I Found out about this dig from Bowie Living! Below is a picture of the fossils that have been found at the park to date!

We continued Week 2 with watching Dino Train from PBS Kids.

We also started reading books from the How Do Dinosaurs book series. Lots of great lessons we were able to have discussions about as well.

Week 2 we started reading What Really Happened to the Dinosaurs? By Ken Ham.

We started this Dinosaur Lapbook to go with the What Really Happened to Dinosaurs book. This is a bible based creation lesson.

We also worked on the Homeschool Share Dino Lapbook and the lap book from 3 Dinosaurs.

We did the World Map book and also taped the Dinosaurs to our Classroom map. (this activity is in the above lap book)

We have also have been doing one activity a day from The Magic School Bus: Back in Time with the Dinosaurs Science Kit.

We did the Dinosaur Digging Kit – Excavate 3 Genuine Dino Specimens

Our Field Trip was to the Smithsonian Museum of Natural History. At the time we lived so close to DC we had to take advantage of it!

Since my kids had a love for T-rex the week before we read Tyrannosaurus Rex & Barnum Brown. We also continued talking about how Scientist digs up dinosaurs and read books on the subject including Dig Those Dinosaurs, Digging Up Dinosaurs (Let's-Read-and-Find-Out Science 2) and Bones, Bones, Dinosaur Bones.

We also continued reading What Really Happened to the Dinosaurs? By Ken Ham and the Dinosaur Lapbook to go with the book.

Related: How I get $3,600+ in Free Homeschool Curriculum Every Year!

We then did a dino dig of our own. I used Safari Ltd Dinosaur Skulls TOOB® buried them in a small tote of sand and let the kids dig them up they then had to identify them (using a card).

We then set up the Grow Your Own Dinosaurs Party Accessory activity.

We finished up our Dino unit with week 4. We continued Watching  Dino Train from PBS Kids. I also want to not my kids watched this for weeks after we finished this unit study too!

We also finished reading What Really Happened to the Dinosaurs? By Ken Ham and the Dinosaur Lapbook to go with the book, and the Homeschool Share Dino Lapbook and the lap book from 3 Dinosaurs.

We finished the activities in The Magic School Bus: Back in Time with the Dinosaurs.

We Made DIY Dinosaur Eggs from Projects for Preschoolers. These were super easy made with sand, dirt, and flour and we used these 2-inch plastic dinosaurs inside.

We added in some dinosaur math worksheets and the dinosaur lap book from 2 Teaching Mommies.

We also did some coloring pages Group 1, Group 2 and Group 3. I like groups 3 the best as they have the name of the dinosaurs as well

For the last day, we did a Design Your Own Dinosaur Sticker Scene much like that one.

78 shares
57 Uses for Fels Naptha Soap That Will Change Your Life & Your Budget!
Egyptian Sand Slime