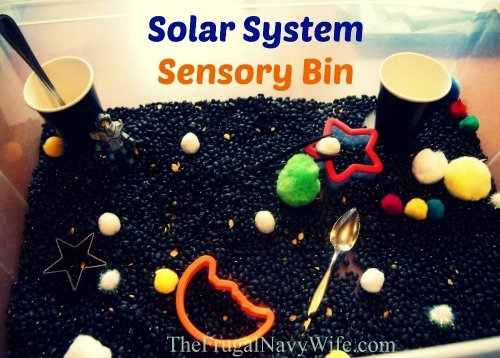 Since I made my sensory bin for a preschooler and a Kindergartener, I wasn't really worried about it being perfectly accurate, I just wanted them to get the idea of space and the general feeling of planets and stars.  I set our book out that we used as the base for our mini unit study  Magic School Bus Lost in the Solar System  next to the sensory bin so that the kids could use it for reference while they played, and they actually did look in it quite a bit to see what   the various planets looked like.

Black beans are a fantastic base to recreate the darkness of space. Yellow and white pompoms mimic the stars, while the larger, brightly colored pompoms are easily identified by little ones as planets. I included moon and star cookie cutters for a little more fantasy play.  For building fine motor skills I like to include tongs for picking up items, as well as spoons and cups for scooping, filling and dumping. If you have space men like this one on hand in your childs toys don't forget to include them in your Solar System bin- this one is my sons Imaginext astronaut figure.  The Imaginext rocket ship was pulled out for play as well since its already one of my sons favorite toys .

Glow in the Dark Stars

Glow in the Dark 3-D Planets

I also found these great peel and stick wall stickers at Dollar Tree that we used on the window where we do school- the kids put them up on the first day and moved them around a few times throughout.  They would be great moved to a wall in the kids room or put on wax paper and saved for another lesson in the future.

I also highly suggest using our 100 page Solar System Printable with this unit. 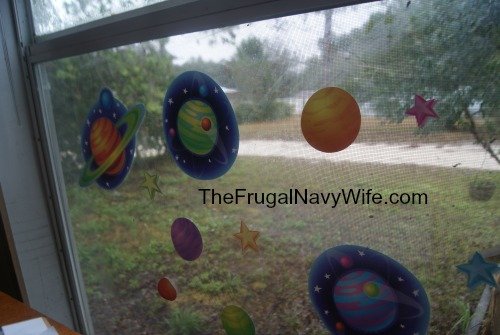