0
You Are Here >> Home » Military » Preparing Financially for Military Deployment

Deployment is a very scary word. It means, for an unknown period of time, you or your spouse will be separated from the family. Once you get past the shock of deployment, it’s important to prepare financially for a military deployment. 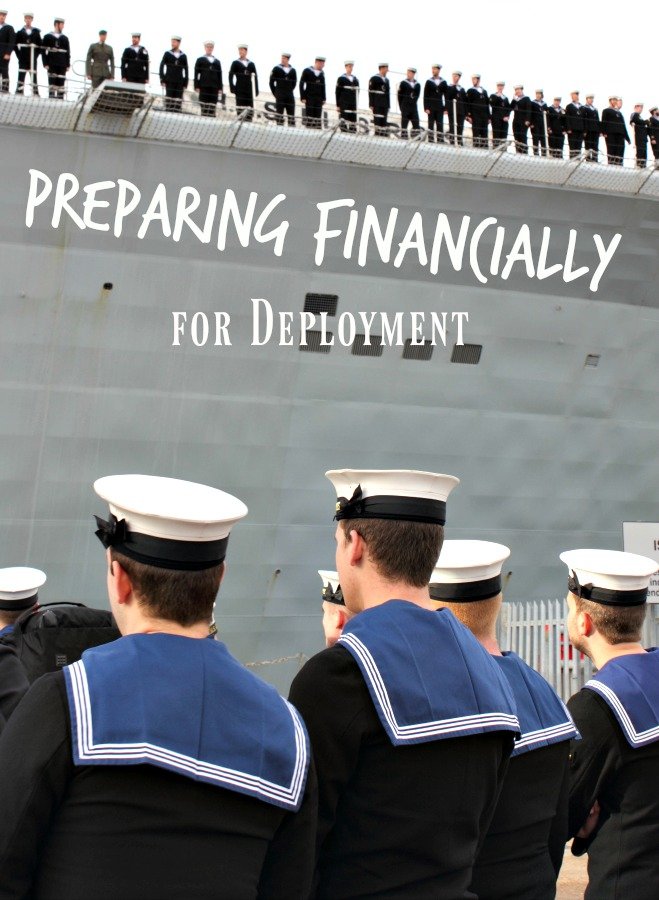 Get on the same page

Running the family finances is tough! Before your spouse leaves for deployment, make sure you get on the same page as your spouse. Sit down and have budget meetings before deployment. It’s important for both spouses to know where they are financially before the deployment begins. This is a good time to talk about whether the spouse not deployed will work and how each bill will be taken care of. The more detail you can hash out now, the fewer issues you will have later.

Our first deployment together my husband and I did this. He was given Hazardous duty pay and family separation pay which gave us more money each month. Many costs went down since he wasn't home, such as our food bills, gas for the car and even car insurance since we called USAA and told them he was deployed, and his car wasn't in use. We took this money, and we were able to pay off his car before he got home. Then once he got home and the expenses came back, and we lost that extra pay we had more room in our budget because we had one less car payment.

We both knew this goal so he didn't send a lot in port (since he was Navy and on a ship the first deployment) and I knew where to put the extra money when I paid bills twice a month.

If you do one thing to prepare financially for a military deployment, make sure this happens. An emergency fund is so very important when it comes to prepping financially. The truth is that you never know what is going to happen with life, it likes to throw curveballs. Having at least $1,000 put back in case of an emergency is super important.

As a military wife, I never had family around and depending how long we had been at that base when he deployed I didn't have a lot of friends many times. During our 2nd deployment, I was pregnant with out second child and had one doctor appointment I wasn't able to bring my son too (military rules) and thankfully I was able to have a friend watch him. Otherwise, I would have had to put him in daycare for the day or hired a babysitter. We were also lucky we PCS'ed a month before the baby was due, so he was pulled from the deployment early and was home for the birth of the child.

Another reason to have an emergency fund is a grim one and one as military wives we don't like to think about. If your spouse is injured on deployment, you will want to have money to be able to travel to their side. Many times this is in Germany, or you might get lucky to visit them stateside but many not where you are stationed. It's always good to have just in case, but pray you never need it for this reason.

Sometimes it is just easier to live on base. No rent to pay no utilities to cover (other than TV and the internet). You are surrounded by people who understand what you are going through, and they offer lots of community events. If you are preparing for a military deployment, it is an option to consider.

There are benefits to living out in town as well; sometimes you will spend less than your BAH (housing allowance) on rent and utilities.

Have someone else lined up

I know that no one wants to think of these things, but it’s important. When you’re heading out to deployment, make sure your spouse or a close friend has the power of attorney over your finances. If something happens to you, you want to make sure things are left accordingly. While this is a tough pill to swallow, it is an important step to make before deployment.

If you are married it is a must to make sure you spouse has the power of attorney; you won't believe the littlest things thy will need it for! Like trying to make sure your car title is mailed to the correct address when you make the last payment! Also have a family member or close friend lined up in case something were to happen to your spouse, if they get sick and end up in the hospital you want to make sure things are still getting paid.

Get a trustworthy bank

You will most likely have money deposited into an account with direct deposit. Before you or your spouse heads out on deployment, secure your finances with a bank that understands servicemen and women. Obviously, you’ll be out of the country, so you’ll need to either trust that things will be okay, or you’ll need to put a second person on the account to help deal with any issues that may arise.

We LOVE Navy Federal Credit Union and have been with them for 10+ years. We also use USAA for insurance, but they have checking and savings too.

Most likely, you won’t be able to check your mail while you’re deployed. Something you can do to help keep track of bills and finances is turning everything into an electronic statement. Most companies allow you to log easily in and change this feature. When you’re back from deployment, you can quickly change it back. This will also help your spouse because they won’t have to fill you in on every bill coming your way.

Did you know Ebates has military cashback deals? Make sure to take advantage of them!

Whether you’re single or married, deployment is hard. However, make sure your finances are in a row can make a military deployment that much easier. What tips would you add to this list?